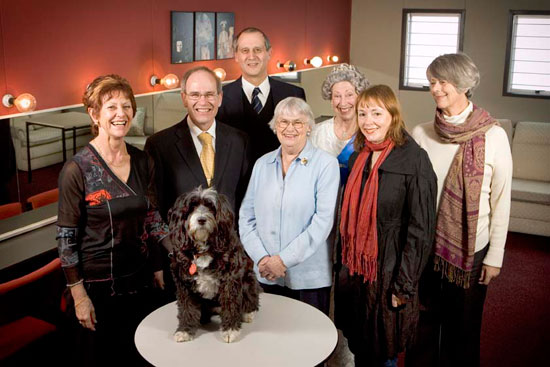 Mayor Len Brown visited the theatre to look at the facilities and discuss the theatre's future plans. His visit was reported in the Howick and Pakuranga Times (13/9/09).

He was photographed during the visit with (from left): Kathy Bigwood (office manager), David Gifford (vice-president; at back), Margaret Nash (president), The Queen aka Judy Rankin, committee members Alison Mudford and Rae McGregor, and Nikita the dog.

Howick Little Theatre has also been in the news elsewhere, having been chosen as a finalist in the 2009 Westpac Manukau Business Excellence Awards. Thirty-two finalists were selected from 120 entries, and HLT, a first-time entrant, was the first theatre to be a finalist in the 16-year history of the awards. The category was for Excellence in Tourism and Hospitality. Read more.

The theatre also featured in The Aucklander's 2009 cover story on the future of the city's community theatre.