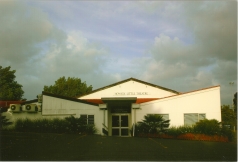 Our 66th year of providing Auckland theatre has a line-up that we hope offers something for everyone. First up is the hit Canadian comedy Stag and Doe, which is a hilarious look at small-town weddings gone wrong. This is followed by a revival of a 1930s Agatha Christie thriller, Love from a Stranger. Then there’s a quirky black comedy, The Viewing Room, from a new California playwright about a man who wants to make amends to his family after his death. Following that is the New Zealand premiere of a Peter James thriller, Dead Simple, adapted by Shaun McKenna. Finally, in November for the festive season, we take a fresh look at the family classic Charles Dickens’s A Christmas Carol, by Michael Paller.

HLT started offering subscriptions 30 years ago, and we’re delighted and humbled to say that some audience members have been subscribers ever since. The HLT Studio launched in 2014 as way to enhance our mainstream offering, and in 2020 there will be three Studio productions, including a world premiere. What a choice: eight local productions: five mainstream and three fringe.

Thank you for your patronage, because without you there would be no theatre. We look forward to welcoming you to HLT in 2020 for our 66th year.

Howick Little Theatre acknowledges the generous financial support of the Howick Local Board, which is greatly appreciated.